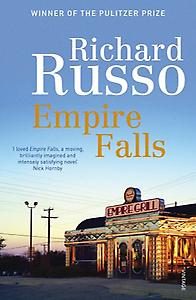 In a warmhearted novel of sweeping scope, Russo animates the dead-end small town of Empire Falls, Maine, long abandoned by the logging and textile industries that provided its citizens with their livelihood. Miles Roby surveys his hometown with bemused regret from the Empire Grill, owned by a local magnate but run by him ever since he was called home from college to take care of his ailing mother. His daily parade of customers provides him with ample evidence of both the restrictions and forced intimacy of small-town life and has left him with a deep appreciation for irony: his ex-wife’s new paramour, “the Silver Fox,” has suddenly become a loyal customer and is constantly challenging him to an arm-wrestling contest; his father, always a day late and a dollar short, has talked a senile priest into running off to Key West for the winter (where they tie for first place in the local Hemingway look-alike contest); and the diner owner’s daughter, apprised of Miles’ impending divorce, is forever trying to engulf him in a teary embrace. Russo follows up his rollicking academic satire, Straight Man (1997), with a return to the blue-collar milieu featured in his first three novels and once again shows an unerring sense of the rhythms of small-town life, balancing his irreverent, mocking humor with unending empathy for his characters and their foible